What is anti-glare, is it necessary to add anti-glare to touch monitors?

What is anti-glare, is it necessary to add anti-glare to touch monitors?

To know whether it is necessary to add anti-glare, and what effect it plays, we first need to understand what glare is and how it is produced.

In life, we are sometimes disturbed by glare. When there is sufficient light, when we are operating a computer or watching a TV screen, we are often annoyed by the reflection of the scene outside the monitor on the surface of the monitor and unable to see the display content; another example is when we stop in front of the glass window and watch the inside of the window, the reflection of the glass surface often prevents you from clearly observing the scene in the window; the lights from the car behind when driving at night will cause safety driving problems and so on. These are all because of the glare caused by light reflection on the glass surface, because ordinary glass has a very high reflectivity.

The external light has a very large interference to the LCD screen. When the external light is strong, the glass on the surface of some LCD and LED screens will produce reflected glare, which will interfere with its normal display; in bright venues such as outdoors, its display performance will also be greatly reduced; it will cause the user of the display to have a bright sensation that cannot be adapted to the human eye, which is very dazzling and easily causes eye fatigue.

Therefore, if the touch monitor is used in a brighter environment, it is necessary to use an anti-glare screen. In order to reduce the interference of external ambient light, reduce the light reflection of the monitor itself, and make the screen clearer, more colorful, and more saturated, the AG-treated anti-glare film has begun to be valued and adopted by more and more touch monitor manufacturers. The touch monitors produced by Top One Tech have very mature anti-glare technology, which can greatly reduce the reflectivity of the screen and make the screen clear and intuitive.

AG stands for Anti-Glare, which means anti-reflection or anti-glare. The AG film is an anti-glare layer with one or several layers of optical refractive material (fine particles) mixed in the optical pet protective film or evenly coated on the surface to form the surface Concave-convex films, these optical materials can scatter the light, so that the light through the anti-glare film and the reflection of external light will be scattered (by irregularly reflecting the incident light on the concave-convex surface), so that the light seen is soft, AG The anti-glare film can significantly reduce the reflected glare of visible light on the glass surface, reduce glare, and enhance the visibility of the display screen. 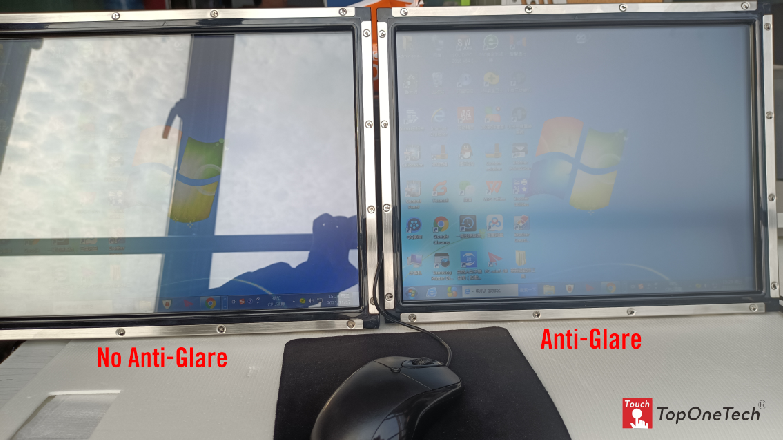 The AG film with anti-glare treatment has a matte effect, which looks a bit like a matte film, but the process will be a level higher than that of the matte film, and the price will be a little more expensive. The optical index of AG film includes the index requirements such as light transmittance, haze, scratch resistance, thickness, etc. These indexes can be adjusted according to actual needs. AG film can generally be used on various electronic flat touch screens, such as outdoor LCD advertising machines, car navigation central control screens, and smart touch monitors for hotels and homes.