With the development of computer technology, the input method of the computer has gone from the original paper tape input to the keyboard input, to the mouse input, and then to the touch input, which has gone through four stages. This process is a process from professional to popularization. Touch screen technology allows more people to use the computer.

A touch screen is an interactive input device. The user only needs to touch a certain position on the screen with a finger or a light pen to control the operation of the computer. Therefore, the touch screen technology has the characteristics of simple operation and flexible use.

Touch screen is also called touch panel. When the graphic buttons on the screen are touched, the haptic feedback system on the screen can drive various linking devices according to a pre-programmed program, which can be used to replace the mechanical button panel and create a dynamic audio-visual effect by the LCD. Simply put, it is an inductive display device that can be connected to input signals such as contacts.

The application scenarios and terminals of touch screens are very extensive, and they can be divided into 7 categories from the perspective of scene types: 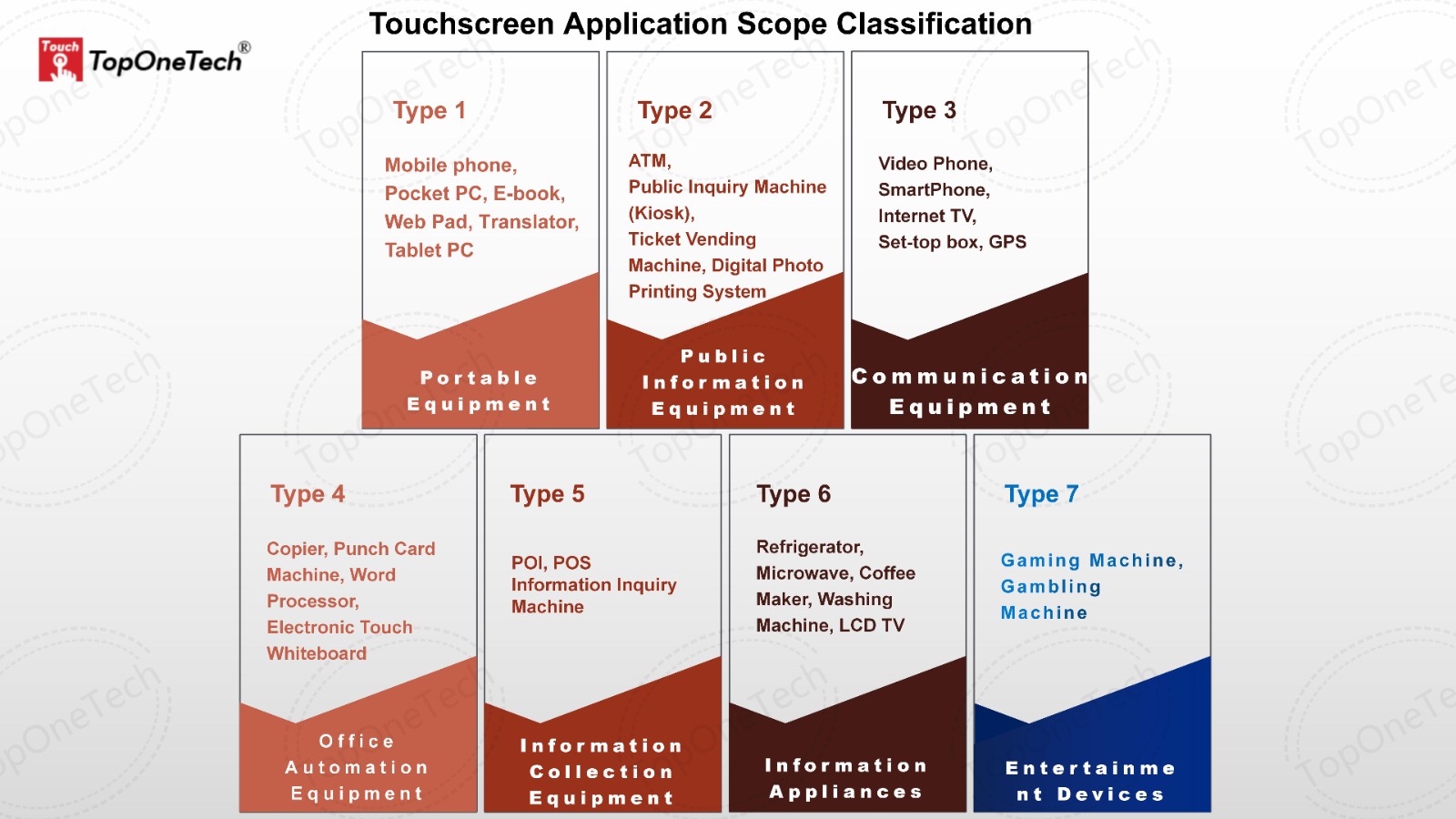 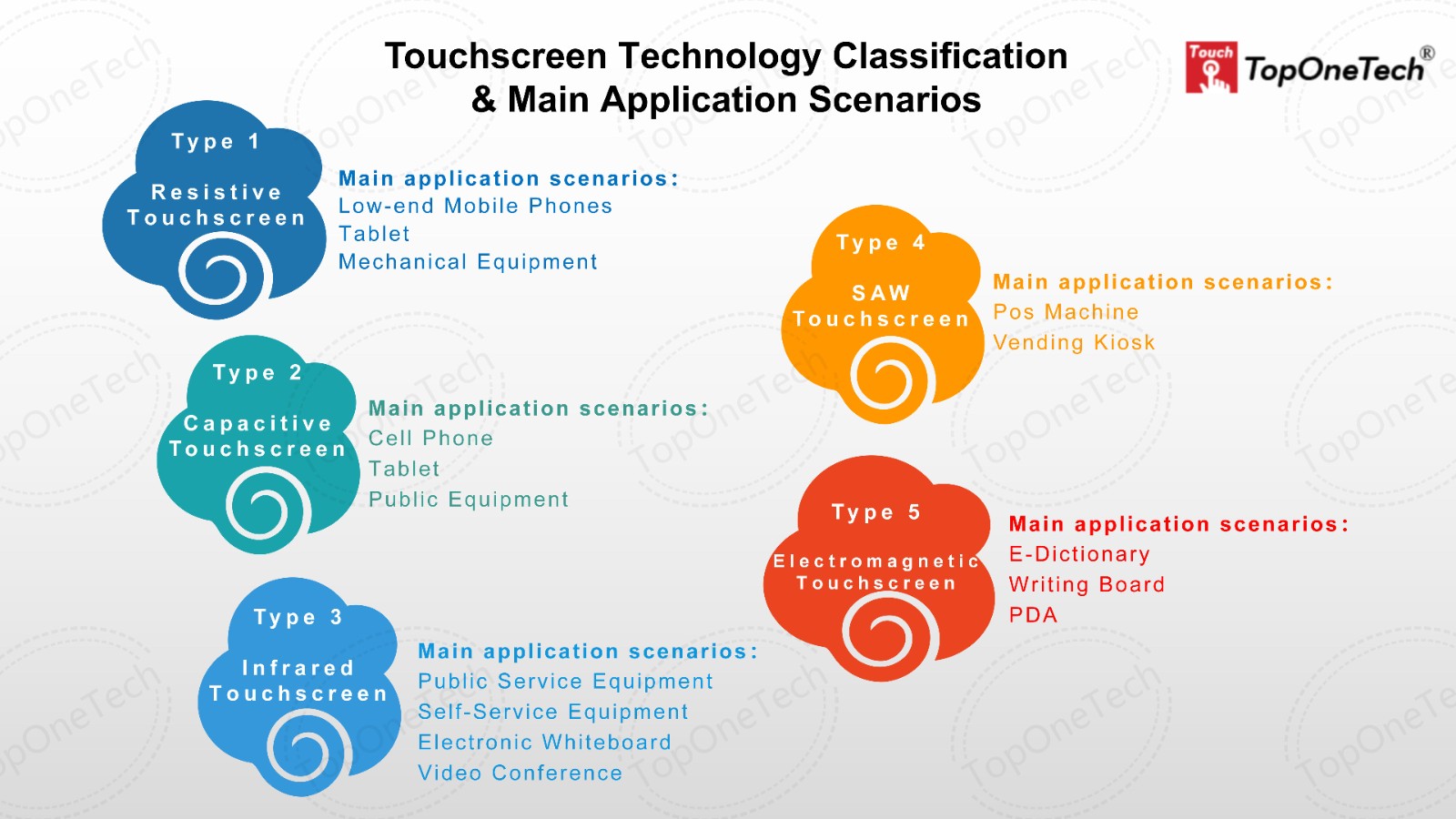 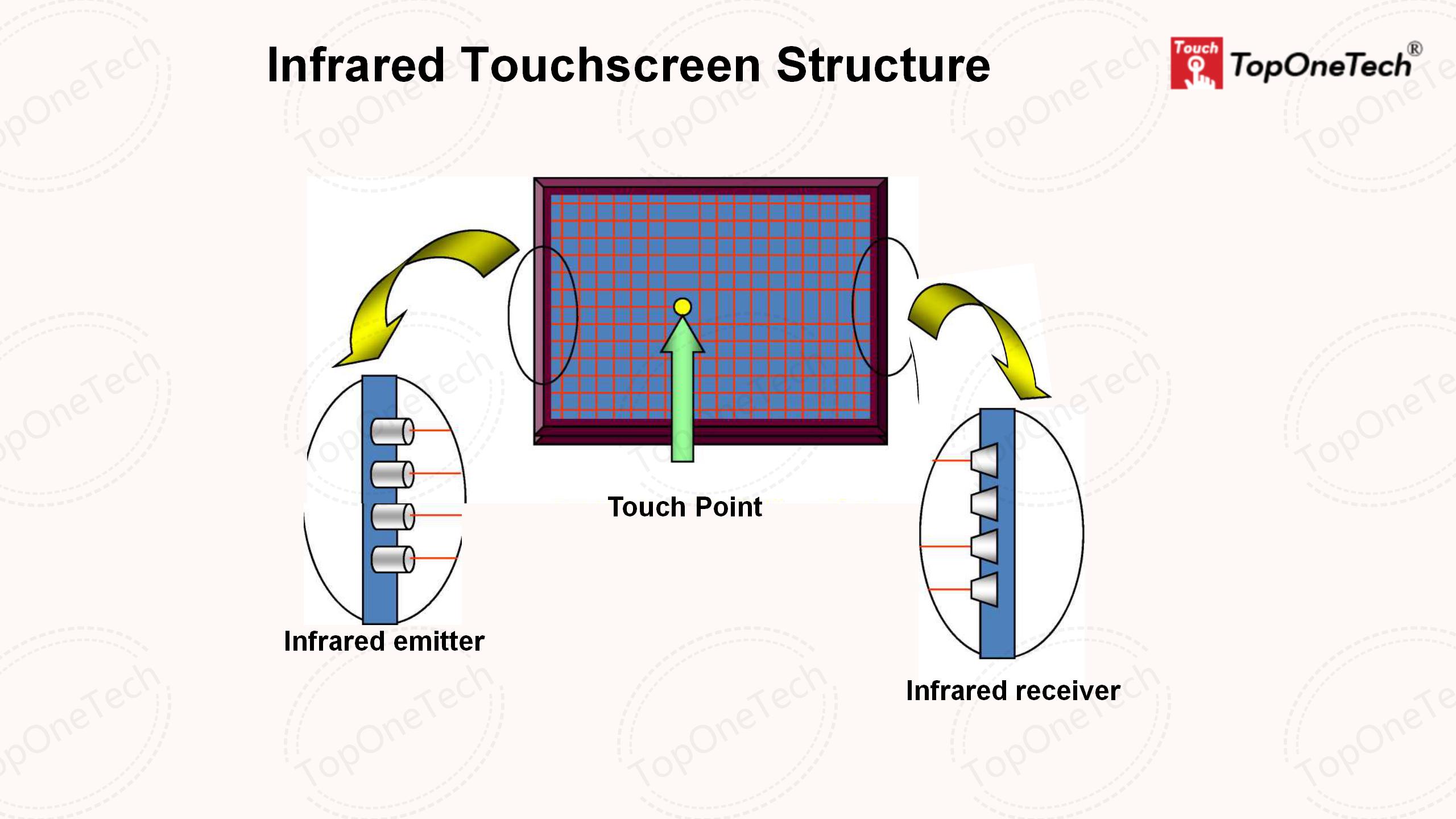 The principle of the infrared touch screen is very simple, just add the frame frame of the light spot distance on the display, without adding a coating or connecting the controller to the surface of the screen. Infrared emitting tubes and receiving tubes are arranged on the four sides of the frame from the light spot to form an infrared network on the screen surface. When the user touches a certain point on the screen with his finger, the two infrared rays passing through the position are blocked, and the computer can immediately calculate the position of the touched point. Because the infrared touch screen is not affected by current, voltage and static electricity, it is suitable for some harsh environmental conditions. Its main advantages are low cost, easy installation, no need for cards or any other controllers, and it can be used on computers of all grades. However, since the frame is only added to the ordinary screen, the infrared emitting tube and the receiving tube around the frame are easily damaged during use. 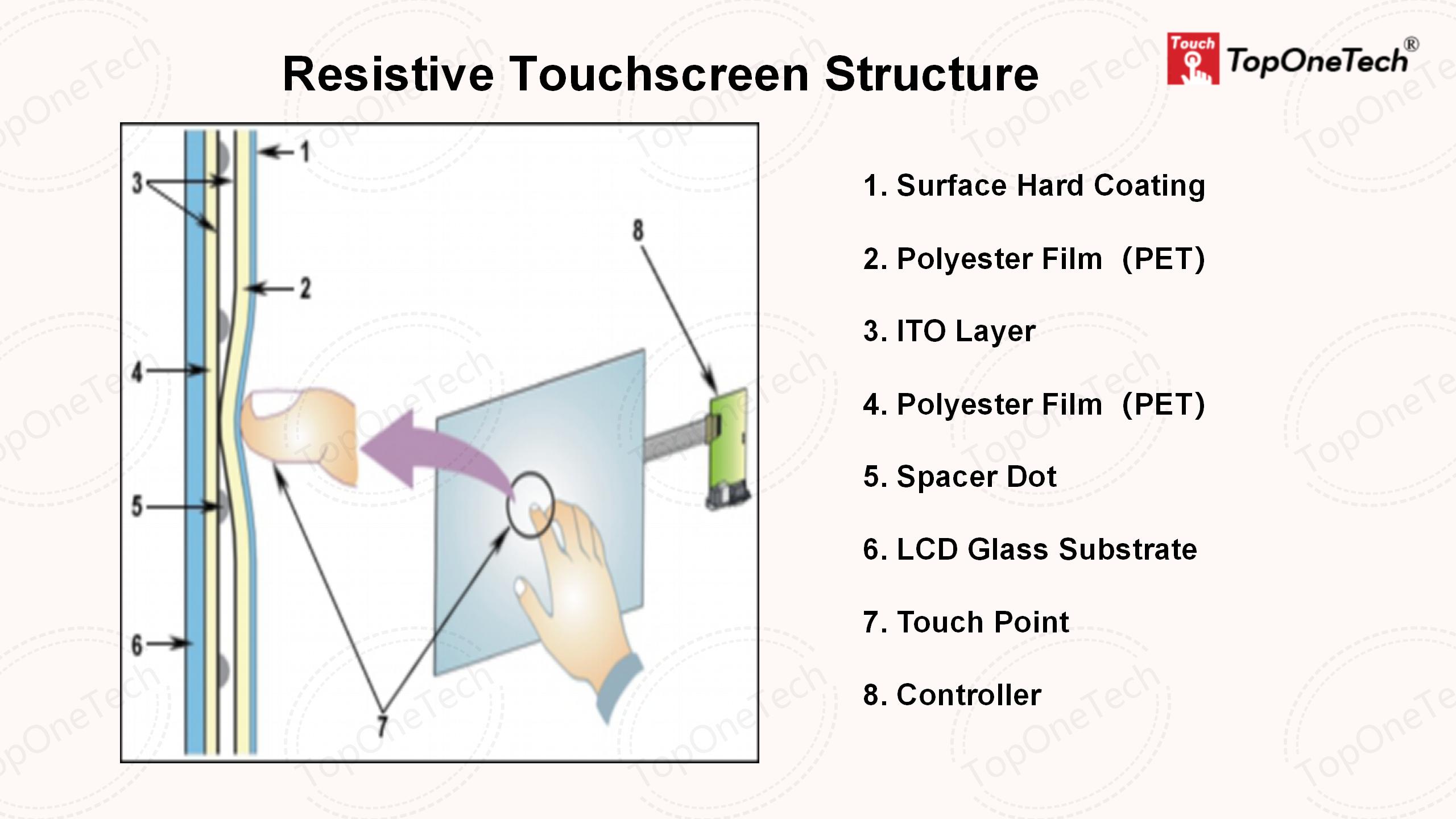 The surface touched by the finger is a hard coating to protect the underlying PET layer. The PET layer is a thin elastic PET film that bends downward when the surface is touched, and allows the two underlying ITO coatings to contact each other and connect the circuit at that point. Between the two ITO layers is a separation fulcrum about one thousandth of an inch thick that separates the two layers. At the bottom is a transparent hard bottom layer to support the above structure, usually glass or plastic. 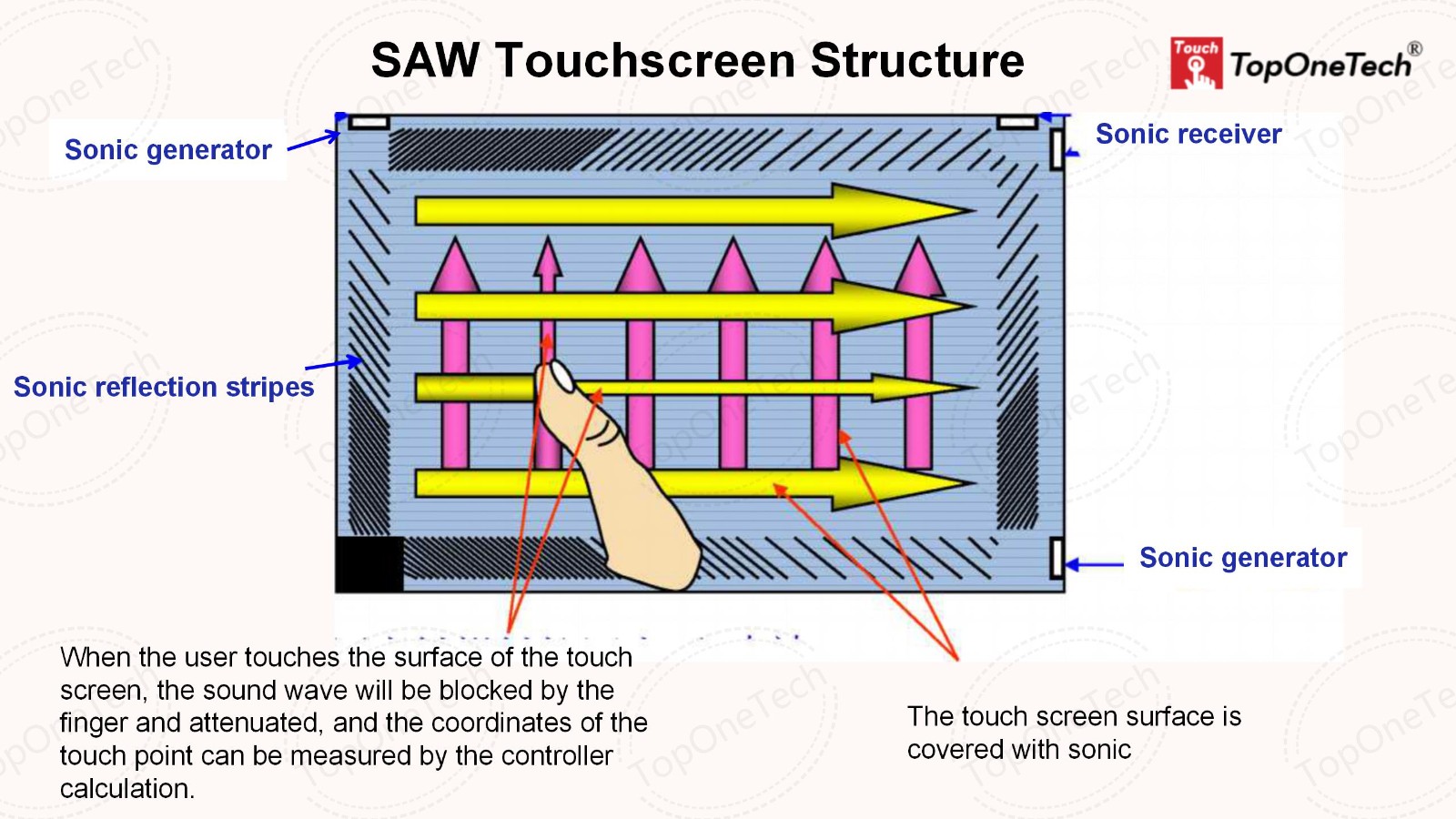 A surface acoustic wave is a mechanical wave that propagates along the surface of a medium. The touch screen is composed of a touch screen, a sound wave generator, a reflector and a sound wave receiver. The sound wave generator can send a high frequency sound wave across the surface of the screen. When a finger touches the screen, the sound wave on the contact point is blocked Determine the coordinate position. The surface acoustic wave touch screen is not affected by environmental factors such as temperature and humidity. It has extremely high resolution, excellent scratch resistance, and long life (50 million times without failure); high light transmittance (92%), which can maintain clear and translucent Image quality; no drift, only need to be corrected once during installation; there is a third axis (ie pressure axis) response, which is most suitable for use in public places. 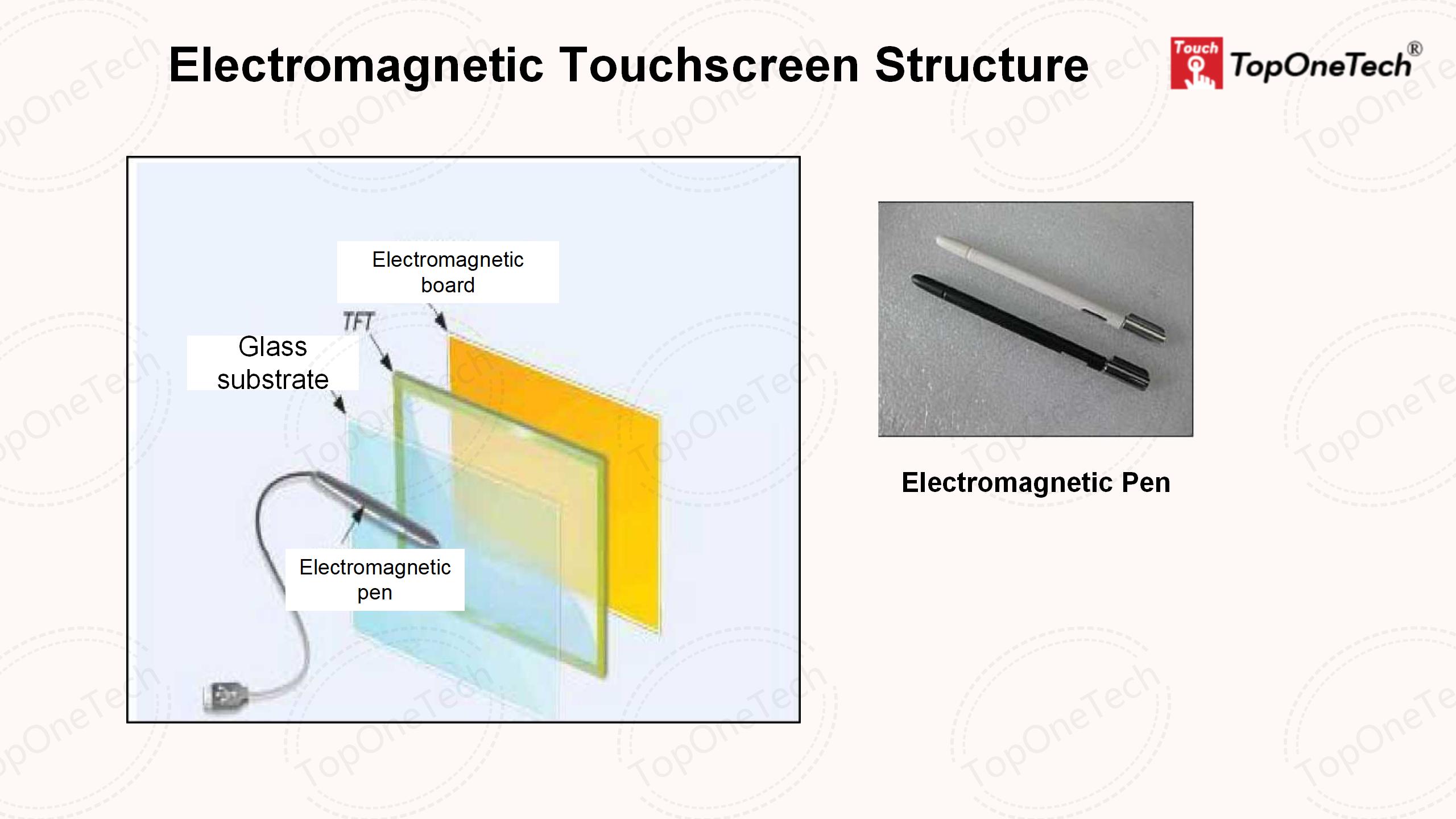 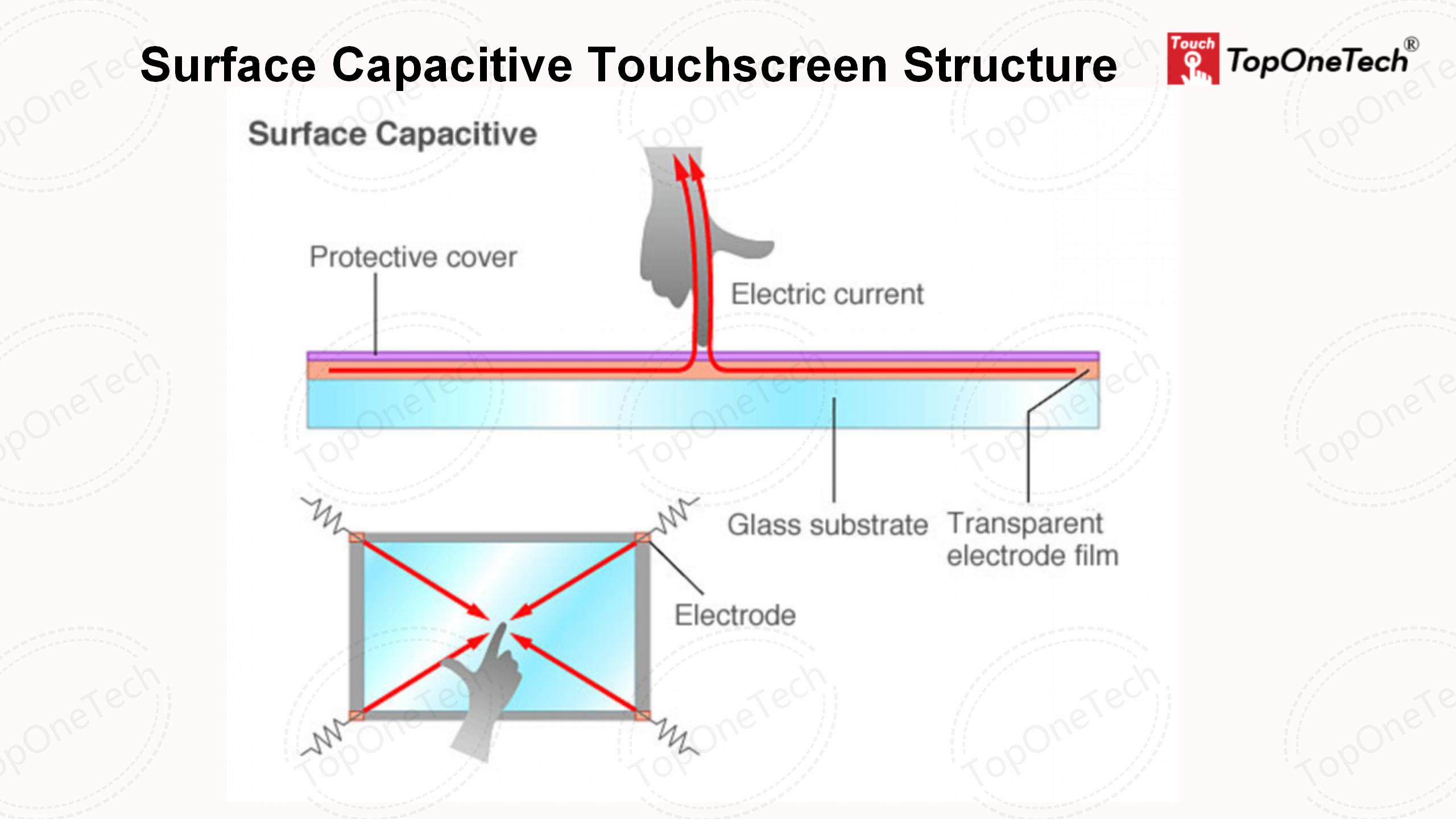 The surface capacitive touch screen uses only a single layer of ITO, and long and narrow electrodes are plated on all four sides of the touch screen to form a low-voltage AC electric field within the conductor. When a finger touches the screen surface, a coupling capacitance is formed between the finger and the conductor layer, and a certain amount of charge is transferred to the human body. In order to recover these charge losses, the charge is replenished from the four corners of the screen, and the amount of charge replenished in all directions is proportional to the distance of the touch point, from which we can calculate the position of the touch point. 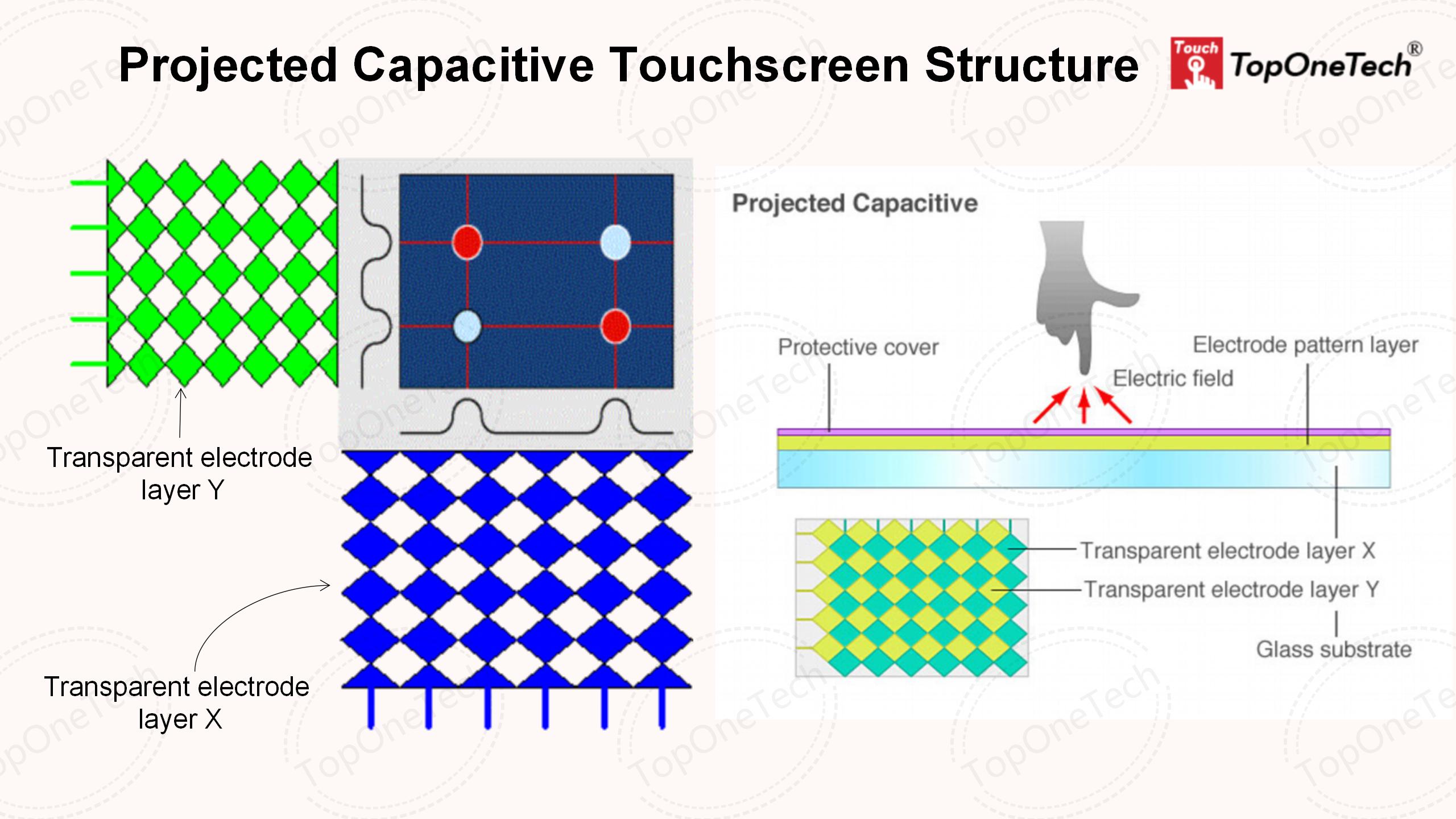 Compared with surface capacitive touch screens, projected capacitive touch screens can penetrate a thicker cover layer and do not require correction. Inductive capacitive etching of different ITO modules on two layers of ITO coating requires consideration of factors such as the total impedance of the module, the impedance of the connecting line between the modules, and the parasitic capacitance generated at the intersection of the two layers of ITO modules.

Which of the five touch screens do you like best? And which one is the best choice?Please follow our next article to learn more!