The three displays of LED, OLED and LED backlight are confusing to many people. In fact, there are essential differences between LED displays and current LED backlight displays. So what is the difference and connection between LED, LED backlight and OLED? Top One Tech will introduce the basic concepts of these three technologies in this article.

What is LED display 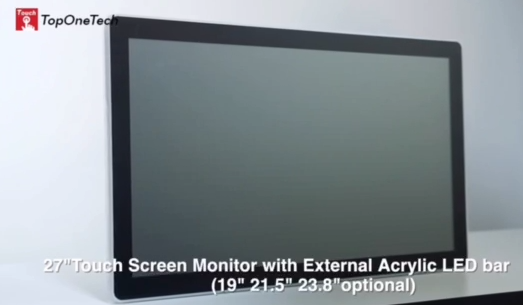 What is an LED Backlight Display

The LED backlight display is just the backlight source of the liquid crystal display, which is transitioned from the traditional CCFL cold light tube (similar to the fluorescent lamp) to the LED (light emitting diode). Let's review the basic principles of LCD monitors.

The imaging principle of liquid crystal can be simply understood as the deflection of the liquid crystal molecules by external application of voltage, which blocks the transparency of the light emitted by the backlight like a gate, and then projects the light on the color filters of different colors to form an image.

The transition of the backlight module from CCFL to LED can bring many benefits, which can make the brightness of the display screen more uniform, the power consumption of the product is lower, and the appearance can be thinner and more stylish.

In general, LED, LED backlight, and OLED are three completely different imaging technologies. The LED-backlit displays or LCD TVs commonly seen on the market today are not actually update for display technology, but only update for the original. It is also incorrect to confuse LED backlight with LED.