Four commonly used touch display interfaces, all you want can be customized

Four commonly used touch display interfaces, all you want can be customized

With the continuous update of technology, touch displays have greatly improved in terms of panel performance, appearance design, and touch functions. Especially in the upgrade of the touch display interface, the breakthrough achieved is very obvious, which is often overlooked by many people. With so many interfaces appearing, which ones should I choose?

You must first determine what you are buying a touch monitor for, and whether there are other external devices, such as projectors, TVs, or other video output devices.

If you don't know how to choose the interface of the touch display, then you must first know the four types of interfaces commonly used in the market and have a general understanding of their functions. They are VGA interface, DVI interface, HDMI interface, DP interface.

The VGA interface (that is, the D-Sub interface) has a total of 15 pins, divided into 3 rows, 5 pins in each row, the interface is D-shaped, used to transmit analog signals. VGA has a mature manufacturing process and a wide range of applications. It is the most common port used in analog signal transmission. It is used in all monitors, TVs and projectors. Therefore, its audience is very wide. Extensive, it is with the support of most video equipment. 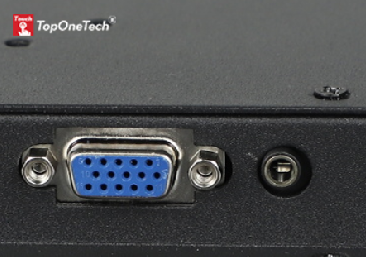 The full name of DVI is Digital Visual Interface. It is an interface standard launched by DDWG (Digital Display Working Group) jointly formed by SILICon Image, Intel, Compa, IBM, HP, NEC, Fujitsu and other companies in 1999. The purpose of the design is to transmit uncompressed digital video. It is widely used in display devices such as LCD and digital projectors. 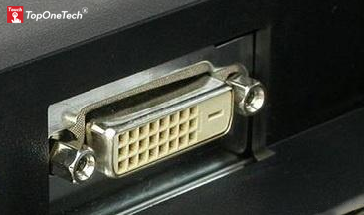 In layman's terms, HDMI is a high-definition video interface, which is more common in current mainstream notebooks, LCD TVs, graphics cards, and motherboards. HDMI is a digital video/audio interface technology. It is a dedicated digital interface suitable for image transmission. It can transmit audio and video signals at the same time. The maximum data transmission speed is 5Gbps. It can support 2K, 1080P, 720P full HD format video output. It is currently the most popular HD interface

The DP interface is also a high-definition digital display interface standard. It is the current mainstream and used for some high-end displays. It can be regarded as an upgraded version of the HDMI interface, but the internal transmission method is completely different from DVI and HDMI, it is with higher bandwidth and better performance. If you are using a 4K monitor, the HDMI bandwidth is insufficient and can only transmit 30 frames, but DP is fully capable. 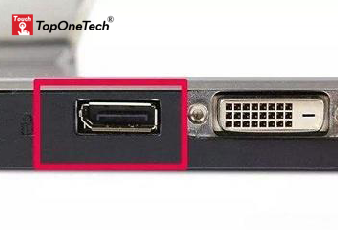 It can be said that the HDMI interface was born to replace the analog signal to transmit video. The DP interface appeared to replace the DVI and VGA interfaces on the monitor. Although the two are not the same in terms of starting point, both will become mainstream on touch displays.

Although these two interfaces are currently the mainstream in touch all-in-one computers, they can also meet current and future transmission bandwidth requirements. But Top One Tech believes that with the increase in consumer demand and the pressure of market competition, future interfaces will continue to introduce new ones.

Just like the 23.8-inch touch monitor launched by Top One Tech, in addition to the VGA port, this monitor also provides a USB-B port, an HDMI port, and a power port.

Look, in addition to the VGA interface, the current monitor also provides an HDMI interface. You may not understand its specific role, but believe me, these interfaces are for the touch display to have better compatibility and applicability. In other words, the functions they provide will make it easier for you to use the touch display.

And this is exactly the direction of future interface development: people-oriented, experience first!

The USB-B interface provided on the touch display solves the problem of fewer host device interfaces and inconvenient connection. The keyboard, mouse, U disk and other devices are connected to this type of interface on the display, and the USB upstream interface is connected to the host, and it can be used normally. At this time, the display has the function of USB HUB expansion.

The HDMI interface on this 23.8-inch white frame touch monitor is an iteration for better picture display quality. The type of interface mounted on displays like this new era provides new functions in addition to video signal transmission. The expansibility of the display is greatly improved, and the convenient experience it brings is beyond the reach of other touch displays with simple audio or video output interfaces.